Steven Colbert was the formula choice to replace David Letterman as host of “The Late Show” on CBS. Don’t get me wrong.  I love Steven Colbert.  He’s one of the most talented and inventive people to be on television in years.  He’s just…how shall I say this…he’s just another “middle-aged white guy.”

CBS, in picking Steven Colbert, played it safe.  From the Carolinas, Colbert went to Northwestern University outside Chicago and performed with Second City.  He comes across as having that formula “Midwestern appeal.”  So does Jimmy Kimmel, David Letterman, Jimmy Fallon, Jay Leno, and Conan O’Brien.  So did Johnny Carson, Jack Paar, Steve Allen, Merv Griffin, Dick Cavett and others who may have hosted late night TV talk shows.  Arsenio Hall is the only host I can think who broke this trend and succeeded.

Keyhole, which tracks such things as hashtags in social media, found that those with an opinion and a smartphone wanted CBS to pick the diverse Tina Fey as the new host of “The Late Show.”  Almost 33% of those that thought they had a vote picked Fey.  Amy Poehler and Steven Colbert were tied for second place.

You can read the whole study by CLICKING HERE.  Below is a graph showing how the social media voting went. 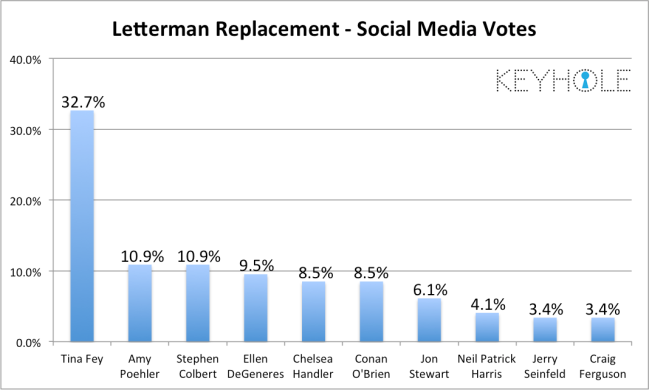 You may have seen reports that by contract the job was Craig Ferguson’s if he wanted it . He hosts “The Late, Late Show,” the show currently after Letterman’s.  He’s very good.  But there is a very good reason he wasn’t going to get the job.  Two words.  “Piers Morgan,” a foreigner and was just fired by CNN.

I should qualify what I said early.  Make it a “middle-aged, white ‘American’ guy.”