Each Memorial Day weekend downtown Cincinnati is home to a HUGE gathering of people.  It’s our community’s way of saying adios to winter and kicking off a summer filled with festivals, socializing with friends and neighbors, eating and drinking beer.  Lots of beer. 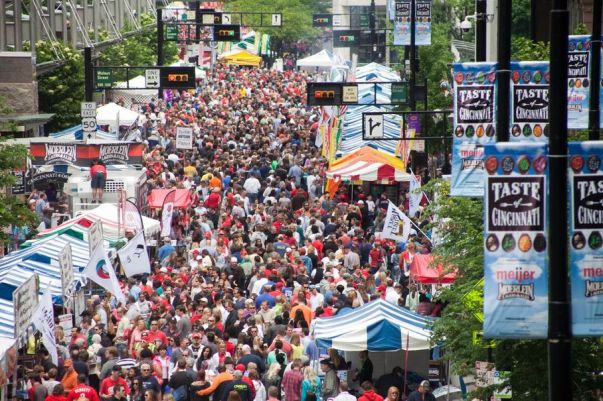 This past weekend “Taste of Cincinnati” celebrated its 36th annual party on the streets of downtown Cincinnati.  This year included longer hours for each of the three days.  This year included over 250 food items to sample.  There were beer trucks every 10 feet.  And the 2014 festival tied 2013 for attracting the largest crowd ever, with sunny skies and perfect temperatures in the low 80’s greeting the hungry hordes.  It’s estimated over 550,000 people walked up and down 5th Street gorging themselves on foods and deserts (like cream puffs) and guzzling pints of beer.

You know what 550,000 people didn’t see?  Not one radio station van.  No radio banners.  No radio sponsorship.  Nothing.  In fact “Taste of Cincinnati” is the second festival I’ve been to this spring and no radio station was seen at the first festival either!

Not too many years ago, radio stations (metaphorically) would crawl on their bellies over broken glass to have a booth, a van, a roll-a-banner, a body sticker, anything to be in front of a crowd like this. “Taste of Cincinnati” had numerous radio stations sponsoring the event back then.

Radio management today is either: (a) very kind to its employees and would prefer to give them all a long weekend so they could rest and enjoy themselves instead of working, (b) very confident of how popular and top-of-the-mind the radio industry is with consumers.  So much so they don’t need to market the station and their personalities don’t need to meet listeners.

Radio is on “double-secret probation,” when it comes to marketing.

All joking aside, this is what happens when an industry that is…at its core…an advertising medium cuts costs to a point a station doesn’t have people to staff events like this.

Let me put that another way.

This is what happens when an industry that is…at its core…an advertising medium displays to its customers (those who buy commercials) it doesn’t believe in advertising.

But all was not lost this weekend.  Innovation reigned supreme on radio.  I got to hear the same Memorial Day Weekend Top 500 rock songs counted down again for the 41st time.