Here we are a few short weeks from the start of NFL training camps and I came across some statistics about why your NFL team sucks.

As the saying goes, “Numbers don’t lie.”  What this exposes is the horrible front office management of some NFL teams and why they don’t win.

In the interest of disclosure I am a fan of the Buffalo Bills, who have sucked since Bill Clinton was President and the Cincinnati Bengals, which have had a pretty good team in recent years.

Why do the Bills suck and why do the Bengals win?  The answer can be found in a recent ESPN article showing available “salary cap money,” “cash committed” and “dead money.”  Dead money is money held against a team’s season salary cap for players signed, but then traded or cut because they sucked.

In the case of the Buffalo Bills, former General Manager Buddy Nix should be thrown in jail with no hope of parole and then tortured for the bad deals he cut while in control of now dead owner Ralph Wilson’s checkbook.  The Bills have committed $140.6 million in cash for the 2014 season.  $22.7 million of that is “dead money,” money going to crappy players Nix thought were going to take the team back to its glory years of the early 1990’s.  Players like QB Ryan Fitzpatrick who couldn’t throw the ball more than 10 yards, but he could grow a beard like a lumberjack.  He did this each season for reasons few understand even today.  Or wide receiver Stevie Johnson, who long suffering Bills’ fans could count on to drop a few game winning passes each year.  This clown Johnson also gets an honorable mention for total stupidity.  While playing the New York Jets, across the Hudson River from Ground Zero, he somehow thought it was appropriate to run around simulating an airplane crashing to the ground in front of 75,000 New Yorkers.  Jesus.  No wonder they stink.  Track down Buddy Nix and jail him now. 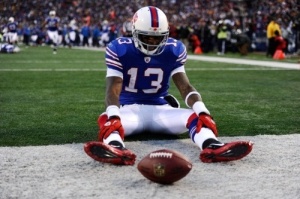 On the other hand the Cincinnati Bengals.  Owner and General Manager Mike Brown, who is hated in Cincinnati, has put together a winning team, a team that has made the play-offs numerous times in the past few seasons.  The Bengals have committed just $111.1 million in cash for the 2014 season with just $2.9 million of that being “dead money.”  In fact Brown, who fans hate because he’s a tight wad, can still sign a great player or two.  The Bengals have $24.5 million in cap space for 2014.  So when the Bengals’ crappy QB Andy Dalton has another bad season, Brown has enough in his checkbook to sign Dalton’s replacement.  Sure you can call Mike Brown cheap, but considering their record in recent seasons, let’s call Brown “fiscally prudent.”

Here’s how your team comes in on the “dead money” scale.  See why your team sucks.