20 years ago, on the night of June 17, 1994, my wife Kathie was flying to meet me in Buffalo.  After watching O.J. Simpson attempt his run for the border only to be met with cheering crowds on interstate overpasses and TV cameras bolted to helicopters, I sped to the airport, ran down to the gate (you could do that back then) and I yelled, “Come on.  Hurry.  O.J.’s trying to get away.”  Being on an airplane she had no idea what was going on. 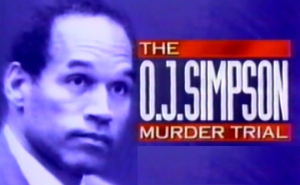 As we headed to the parking lot, the dozens and dozens of cabs waiting for fares that muggy June night in Western New York had their radios blaring either WBEN or WGR55 as America joined together in this country’s first reality media show.  TV’s “Real World” on MTV, considered the first reality show, premiered two years prior.

The truths that were revealed about America were numerous.  For example, many thought race was no longer an issue almost two and a half decades after Woodstock.  We found out that wasn’t true.  The day Simpson was acquitted in the criminal trial, I watched the verdict along with an African-American woman.  She couldn’t believe he got away with it.  Yet most of black America cheered and white America, hoping for a conviction, was left in shock.

Media changed forever.  Reality TV was invented.  Focus a TV camera on story that has racial overtones, a mixed marriage, a double murder, an accused celebrity, a wacky house guest, a bigoted cop, a flamboyant lawyer, a prosecutor with great legs and a cable news network starved to fill programming time and you have an instant ratings winner.  The only thing that would have made this story better is if social media gave Americans more opportunity to “tweet” rumors and innuendos about the two people almost decapitated by a former NFL star and football “hero.”

CNN covered O.J. Simpson day in and day out for the next year and a half.  TV programs like “A Current Affair” were created to feed people’s desire for all things O.J.  Jay Leno’s “Tonight Show” featured the “Dancing Ito’s,” named after the trial’s judge.  News was now entertainment. Entertainment was now news, just as the classic movie “Network” predicted in 1976.

Talk radio changed too.  We learned about what is called Topic A and how Topic A can drive high ratings.  You know hosts actually talking about things people are interested in.  Reflecting a listener’s thoughts and concerns, being their voice, their group leader and their advocate.  20 years later I’d argue some talk radio and many of its hosts have no clue what Topic A means.

It was a great time for good talk stations and an eye opening experience for those stations that wanted to continue talking about issues they thought were more important to America.  Talk radio, then, found the listener determines what’s news and what’s of interest to them, not the other way around.  It was a time when males, females and younger people came to talk radio to hear other opinions about O.J. and to have their opinions be heard too.

It was a time when Rush Limbaugh’s catchy, but totally clueless phrase “No O.J. None of the time” rang hollow.  As a programmer I remember getting a call the morning of the criminal trial verdict from EFM Media, Limbaugh’s syndicator at the time, asking if my station was going to pre-empt his show to carry the verdict.  They were indignant when I said yes.  If I remember correctly, Limbaugh finally gave in and carried the verdict on his show as well.

What the O.J. Simpson drama revealed was culture had changed and in many cases that culture shift forced media to change and reflect these new American sensibilities.  TV network newscasts on CBS, ABC and NBC come to mind.

It’s not too different than today actually.

You see culture again has changed, generations have passed and younger people, not Baby Boomers, are now in control with different beliefs on social issues like same sex marriage, legalization of pot or illegal immigration.  Yet the talk radio of today cannot stop reflecting the views of a generation past, refusing to address these new generations with their views and ideas about the society we live in at present.

The tired political rhetoric of today’s talk radio speaks to elderly males and their concerns.  Candidly put, talk radio today has turned into nothing more than a senior political agenda, an agenda that speaks to a shrinking audience, an agenda irrelevant to the younger people needed by talk radio to survive and prosper in the future.

Most listeners are smart people.  Very smart.  They know foolish, trumped up and partisan rhetoric when they hear it.  Yet talk radio hosts who are out to change the world can’t help themselves, even when the world changed on them.

The O.J. Simpson story revealed that to the media 20 years ago, but we fail to remember.

4 comments for “Talk Radio Forgot What it Learned When O.J. Killed Two People”