Insights from Borrell Associates are always thought provoking and can also be shocking for the many who may think short term and avoid any long term planning.

On Monday, the consultancy group which focuses on changes in the advertising world, revealed their predictions for changes in media and how media may look in 2024.  I was one of the 600 plus people who joined the webinar.

Before concluding these guys are crazy, think back ten back years and consider the technologies and media we use today that weren’t around in 2004, like an iPhone.  I depend on mine more and more each day.  I’d have a hard time getting by without it.  The iPhone was introduced in June of 2007, a little over seven years ago.  It just seems like a long time ago.

The year 2024 seems far away, but it’s not.  Here are some of Borrell’s media predictions.

Before you deny this, let me show you a few pictures. Here’s a car radio from 2004.  AM, FM and CD player.  Radio had a captive audience 10 years ago.  You didn’t have much choice in hearing music, news, talk or sports.  Just a handful of local stations and maybe XM or Sirius.  You were captive.

Below is a connected car dashboard from a 2014 vehicle.  Note the additional options vying for your attention.  Internet pure-plays, Apps, other media options and by 2024 even more options.  Many more. 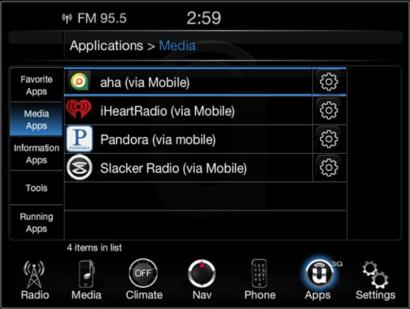 I noted in a previous blog there are too many radio stations on the air, selling too many commercials which drives down the value of the facilities and the inventory.  The future has arrived and even more options for the consumer are on the horizon.

This month HBO said it would begin providing content through HBO-GO.  What I didn’t see in any article about this was how HBO, with its great content, will now bypass the cable and satellite companies that serve as its distribution platforms and are now go straight to the consumer.  If a major network like HBO will and can do this, it’s only a matter of time before ABC, CBS, NBC, FOX and the countless other networks bypass local TV affiliates and cable and satellite providers and go straight to the consumer via digital media.

This morning I heard Dallas Mavericks’ owner Mark Cuban on ESPN’s Mike and Mike show.  He said he loves change because it brings opportunity.

As it was said on the Borrell webinar, control will shift from those that own an audience (i.e. a radio or TV station) to those that influence that audience (content producers).

No one is better at creating content than you.  The opportunity is here.  We need to recognize the changes happening around us today and in the next 10 years.