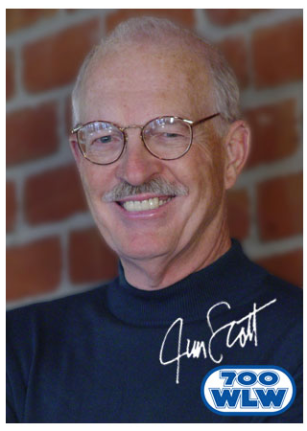 Days before Jim Scott announced his retirement my telephone rang.  On the other end of the telephone was that friendly and commanding voice.  “Darryl!  It’s Jim Scott!”  That’s the way his calls always began.  He called to tell me he was retiring and wanted me to know before I found out through others.  We spoke for about 10 minutes or so.  After finishing the call, I sat quietly for a moment and I’ll admit I choked up.

This was the end of another era in Cincinnati’s rich broadcast history.  Jim Scott, like Gary Burbank before him, leaving 700WLW and ending their decades in radio.  Decades of informing, entertaining and being the best radio companions.

Cities like Cincinnati are extremely provincial.  Neighborhoods are strong.  Some say our communities are closed to outsiders.  Some of that maybe true.  But, if you stick it out, once you belong, you will find the closest of friendships.  Our little area of the Midwest is a very special place.

As the radio story goes, when Jim first arrived in Cincinnati from WKBW in Buffalo, he made it a point to introduce himself to everyone.  And I mean everyone.  He’d finish his morning show on WSAI and then head to Cincinnati’s Fountain Square where he’d hand flowers to women and ask them to listen to him.  Other days, Jim would literally knock on doors, going house to house, neighborhood to neighborhood, introducing himself and asking those that answered if they would listen.  That was decades ago and he never stopped.

Years ago, at a wedding reception at Cincinnati’s beautiful art deco Union Terminal, I was standing with a small group of people, including Rich Walburg, my programming partner in crime at 700WLW. Another in the group noticed Jim going table to table introducing himself.  The fellow said, “Is that Jim Scott?  I want to meet him.”  Rich in his driest delivery replied, “Stay here.  He’ll make his way over.”  He eventually did and Jim introduced himself.

Jim has a way to make everyone feel special and he really is interested in how you’re doing.  He has a deep compassion for people.

He’s a radio personality who understands his on-air role, the importance of being an active member of the community and the value of his personal brand in the market.  He treasures his relationship with listeners and advertisers.  He knows ratings must come with revenue.

Jim is actively involved with many of our community’s service organizations and charities, because he knows how important it is to give back. Being involved in community service is normally the job of a radio station’s Market Manager.  That wasn’t the case at 700WLW.  I joked over the years, we had no idea what he did.  We just knew at night he was representing the station at a fundraiser and the next morning he was on the air at 5am.

What I respect the most about Jim is his competitiveness.  For most of his years in Cincinnati his morning show has been dominant.  But, there was this one time that Jim’s show fell to #2 with people between the ages of 25-54, the so-called money demo. He lost by one-tenth of a point, I believe to the Bob & Tom show.

This may have been the only time I saw Jim mad.  Well maybe not mad…aggravated.  I tried explaining the difference fell within the statistical error of the ratings and not to worry.  It didn’t help.  Later that day, after he left, I wrote him a note and slipped it under his office door.  It said, “We’ll get the bastards next time.”  It became our running joke.

A number of years later, Jim was on vacation, in Ireland, golfing with his son.  One early afternoon my telephone rang.  “Darryl!  It’s Jim Scott!”  Unsure if he was still out of the country I asked, “Where are you?”  He told me Ireland.  The ratings were coming out that day.  So he called from across the Atlantic Ocean to ask me one question, “Did we get the bastards?”  And then he laughed.

Year after year, decade after decade, Jim gave himself to his radio audience, everyone of them considered dear friends.  He was there during good times and bad.  Sunny skies or snow.  Jim Scott is a radio personality to study and learn from.  There will never be another like him.

He’s knows radio.  He understands his place in the market.  Never abuses his power or notoriety. Keenly knows the importance of ratings, the advertiser and revenue.  He’s a competitive personality and a radio icon that has survived and flourished ratings book after ratings book because of his ability to adapt and learn from an ever changing marketplace and audience.

Let me ask and answer that question one final time.

Jim.  Did you get the bastards?

Be very proud…and sleep in!