The immutable “Rule #1 – It’s about ratings and revenue.”  If you don’t accept this, you’re doomed.

Each fall, the big media companies go through budgeting for the new year.  The companies look to see who they can fire even at their successful stations.  A standard exercise is being asked to “rank” employees.  Thinking managers at the station level know if you’re told to go through this twisted process and report back, chances are numbers 8, 9 and 10 on your list of 10 are being sent home.  It’s also a time for companies to look at the failing stations in their portfolios.  Some get another chance, while other laggards and their staffs get a December date with human resources.

Toward the end of 2015, WDBZ-AM, “The Buzz,” owned by Radio One, was not spared because it wasn’t living up to “Rule #1.”  Fair enough.  It was a black talk station aimed at the inner city community in Cincinnati.  It had a bad signal and equally bad ratings.  Rarely did one hear a commercial, outside of political season spots, a funeral home endorsement or a weekend car dealer remote.  Funny thing, that dealership is way out in the red-neck suburbs, across the street from a Tractor Supply Company store (if that gives you any clue) where they sell Wrangler jeans and cowboy boots.  Let’s just say that dealership was way out of the station’s coverage area in more ways than one.

Right before the holidays, Radio One gunned most of “The Buzz” staff and started playing gospel music.  As we all know, a sterile “computer” is cheaper than an engaging live “personality.”

But here’s what I found Interesting.  There weren’t many mentions of the station’s format change in radio industry press and few mentions of those let go.  In fact most of the press covering radio these days seem to downplay the constant layoffs and disrupted lives of the people affected by a RIF (reduction in force).  And if a person’s name is mentioned, rarely is there a follow up as to how they’re doing.  I thought I would start.

But, first I’d like to call it as it is. 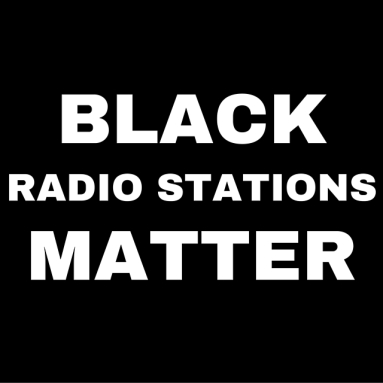 Unfortunately, one of Cincinnati’s best talk show hosts was on “The Buzz.”  Nathan Ivey is his name.  I think he worked seven days a week, except when he would be bounced from his show for that car dealer remote one Saturday each month. 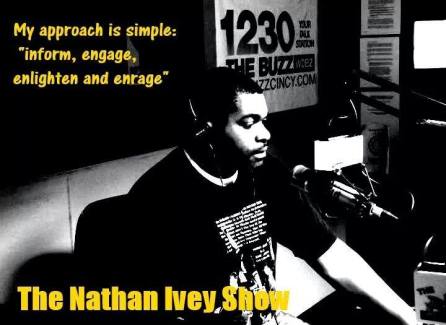 Curious.  Connected.  Comical.  Culturally astute.  A communicator with great instincts in getting the most out of topics and callers, callers which he really didn’t need.  Never belittling.  Always respectful. Playfully sarcastic.  And with silence or a single word said with a tiny twinkle in his voice, made you laugh out loud at the lunacy that will pass for topics, controversy and some callers on talk radio today. He spoke often about is life and his family and his struggles as a husband and father to his kids.  He humanized himself and was genuine and real.

On “The Buzz” many of his callers had nicknames, like “Lady C.”  “Lady C” was “Miss C” on my old show. Her real name is Yvonne.  A lovely African American woman who had strong opinions and knew how to really get under the skin of the testosterone driven white male audience on “The Big One.”  Many male callers on “The Buzz” had self given stage names like “Black Lion.”

His show was appointment listening.  Part pop entertainment, culture, hip hop, sports and politics from a black perspective all held together by his strong advocacy for the community he served. Nathan embodies everything that will make the successful radio talk host of the future – if this format is to survive.

He’d play off genders, respecting women and dragging out the misogynist views of male callers.

One of the funniest and most memorable things I had ever heard on the radio came on Nathan Ivey’s show.  Trust me on this one.  It doesn’t translate well to a written blog.

For some reason a male caller needed to explain to Nathan why a woman would never be poor in this country.  I’m guessing this rant had been building up in this caller’s warped brain for years and it was obvious he had given hours, if not months or years of thought to form his opinion.  In his mind there was no chance of a poor woman living in America, not with its core capitalistic beliefs and economy and this caller knew the very simple reason this was the case!

“No woman will ever be poor.  Really?”

“Because she’s got a diamond.  You understand what I’m sayin’.  A diamond.  All women have a diamond.

“A diamond?  All women have a diamond?”

“A diamond between her legs?”

“A diamond.  A woman ain’t never gonna be poor.  She’s got that diamond, that diamond between her legs.”

As I was laughing out loud, I thought, “I did not know this.”  I was very enlightened that afternoon.  The caller stopped short of advocating all women should take up a career in prostitution because of the gem they all carry.

I follow Nathan on Facebook and while he hasn’t totally revealed his future plans, he continues to use the social media followers he gathered while on the radio as an audience.  He says “the best talk show in Cincinnati returns on Monday at 7am.”  He’s a former talk host with a plan and a talent who will not be silenced – regardless of the medium.

May be it’s time for the radio industry press to start taking more interest in the talented people that have left radio on their own or because of the massive downsizing happening in our industry and focus on the human side of what’s gone on since consolidation began 20 years ago.  I believe a focus on those that have made new lives and those that have struggled and may need help from an industry that at one point was the proudest of families would be appropriate.

After all, radio is at its best when it emotionally touches a person.  The human side of people like Nathan Ivey makes a bright future story for a format (talk) and industry (radio) struggling to survive.