Bob Pittman, the head of iHeart Media, said this when announcing the company’s name change from Clear Channel Media + Entertainment.

I can’t imagine former Clear Channel CEO Randy Michaels ever saying something like this.

It’s going on three years since the Federal Communication Commission (F.C.C.) announced plans for “AM Revitalization.”  Then, late last year, the long-awaited AM Radio Revitalization Report and Order was finally issued by the F.C.C.  Included are numerous items, most of which will create additional interference on the AM broadcast band.  One item allows AM stations to operate with higher power at night.  The idea is to help lower power local stations provide a better signal so it can better serve its local market with meaningful local programming (more on this later).

This, however, would be at the expense of other stations, including those big signaled 50,000 watt “clear channel” stations.

But, first a history and science lesson.

Decades ago, to insure radio coverage was available in rural and farm areas of the country, the U.S. government assigned “clear channel” status to stations on certain frequencies across the country.  These are stations like WSM in Nashville, WLW in Cincinnati and WLS in Chicago.  With 50,000 watts, an assigned frequency on the left or lower end of the AM band and most importantly no other station operating on those frequencies at night when the AM signal travels farther, these stations were heard in upwards of 35 or 40 states.  Having a Class I station, as it was then called or a Class A today, was unique, valuable and gave station owners a competitive advantage over their lower powered competition.

Simply put, two transmitters operating on the same frequency simultaneously cancel each other out.

In the mid 1980’s, the F.C.C. allowed what were then called Class IV local AM stations to increase power at night.  These stations were on frequencies like 1400khz with an assigned daytime power of 1000 watts and 250 watts at night.  Remember, AM radio signals travel farther at night.

While this may be counterintuitive, unless you understand the science behind radio, these stations had bigger coverage areas with 250 watts at night.  Why?  By increasing the power to 1000 watts at night, increased interference on these frequencies resulted in smaller coverage areas for stations once the sun went down.  The signals cancel each other out at distances away from their transmitters.

A few years ago, I wrote a blog about the F.C.C.’s initial plan to help AM radio.  My then employer and many radio industry trade publications didn’t appreciate my candor.

Guess who was right?  People are just now getting outraged?  Almost three years after “AM Revitalization” was announced and I spoke up?  Now?

I’m guessing someone at iHeart Media Googled “clear channel” and found they own a bunch of these stations.

“Well, hot dang,” as they say in Mississippi!

It appears an order was sent from the offices high above Midtown Manhattan for iHeart Media owned “clear channel” stations to instruct listeners to sign a meaningless “online petition.”  The petition calls on the F.C.C. to drop their proposal allowing increased power for some AM stations at night, especially on “clear channel” frequencies.  Correctly, the company concludes, this would cause interference and cut down the nighttime coverage areas of the “50 clears” they own.

For example, there’s iHeart Media’s WGY in Schenectady/Albany, New York, a legendary station (if there ever was one) originally put on the air by General Electric.

I’ll let them make their case. 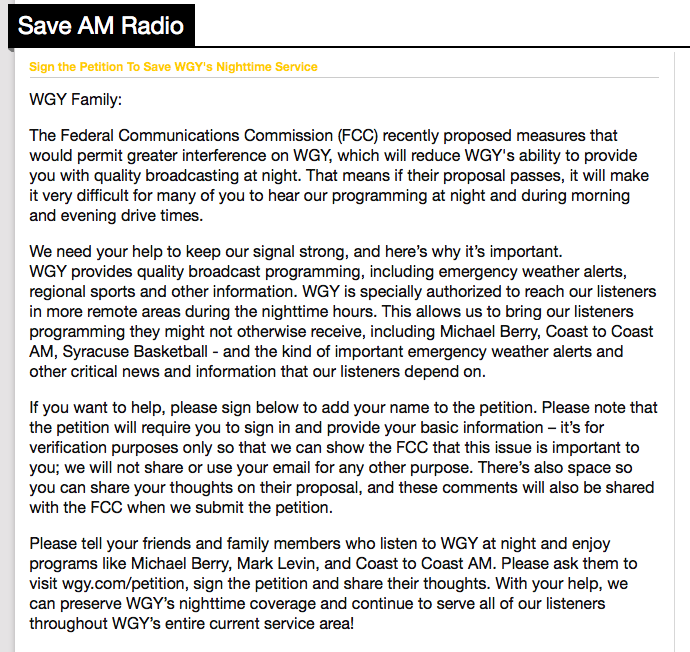 Interesting, because their programming isn’t anything unique.  If WGY disappeared, listeners in their region could easily find the same programming elsewhere.

But, let’s see how unique the rest of WGY’s weekday programming is and where it comes from.

To be fair, this isn’t the fault of the local program director or market manager.  This is what they’ve been required to broadcast from iHeart Media and its syndication arm Premiere Networks.

Does syndicated programming have a place on a station like WGY?  Of course it does.  Just not 85% of its programming.

If iHeart Media, or any consolidator company for that matter, actually thought they had something special with their “clear channel” stations, they would have been fighting to insure a strong AM band years ago. They would be defending their investments from the bad ideas coming from the F.C.C.  They would have spoken up almost three years ago, as I did.  But, they didn’t.

iHeart Media also owns 700WLW in Cincinnati, a station that is locally programmed.  But, this station is the rare exception when compared to many of the other “clear channel” stations it owns.

I’m not being nostalgic here.  A “clear channel” AM is a very special type of radio station.  It has unique strength, power and influence even in times of quickly advancing technology.

← Radio’s Big 20th Anniversary (of Being Sold Out!)
What Happens to Talk Radio in November? →

7 comments for “AM “Revitalization” Destroying AM Radio”