Each fall, old white guys in ill fitting suits, wrinkled button down collar shirts, unpolished shoes and ties fashionable in 1986, American radio broadcasters if you will, gather in a different city to discuss what’s right and wrong with the radio industry, discuss theories, drink a few beers and return home to accomplish nothing.  And this year it costs just $899 on-site, plus plane fare and hotel in Nashville for a few days.

Remember when “AM Revitalization” was announced three years ago at the “Radio Show?”  How’s that working out?  Not good.  Is that really a surprise?

In the three years since “revitalization,” AM radio stations continue to suffer the failed governance of the Federal Communication Commission (FCC), which you may vaguely remember is supposed to protect the public’s interest. That means you the listener.  And there’s the National Association of Broadcasters (NAB), the Washington, D.C. lobby, that works hard on behalf of the consolidator companies to help out any politician with an open palm in order to get the next bad idea through Congress and the FCC.  Public interest and you be damned.

The Friday before the annual fall Radio Show began, when few were paying attention, FCC Commissioner Michael O’Reilly made remarks at a luncheon.  After a slight belch, a sip of that nasty unsweetened iced tea served up at hotels and a gratuitous mention of the “fine lunch,” in the speech’s second paragraph he got right to AM Revitalization, part of which allows for AM broadcasters to simulcast programming on low power FM translators they get a hold of.

The Commish also said he’d like to see “relief” from that oppressive main studio rule currently requiring a station’s “main studio”(however that’s defined) to be located within the city of license, within 25 miles of the city of license or within the main signal.  I mean why actually maintain a studio in let’s say Peoria when you can actually use a studio in Boise?  So much for the public’s interest.  I’m wondering whose idea this is? Listeners or the consolidator companies?

But, it was the third paragraph where he dropped the bomb.

“No amount of Commission action or government involvement is going to save the medium (AM radio) from irrelevancy if listeners and advertisers abandon stations, although I don’t see that happening in the immediate term.”

And then his nose really start growing.

“From my conversations with AM radio license holders, that’s exactly how they see it too: they just want the Commission to eliminate some of the barriers to competition so they have the tools to win the hearts and minds of listeners and let the chip fall where they may.”

Yeah.  AM broadcasters stand at the ready with checkbooks awash in money to invest and improve the programming they offer if only “some of the barriers to competition” were eliminated.  It must be those “barriers” forcing broadcasters to program informercials that promise to clean you out if you’re constipated on weekends.

Three years ago I wrote about those cheering “AM Revitalization” at the fall Radio Show in 2013. I’ve repeatedly said it’s foolish to think moving programming to the FM band will help AM listening.  It won’t. Three years ago I dared to suggested AM station owners stop whining and understand what they have and that was land and lots of it.  I’m guessing I was ahead of my time, because in the months since  iHeart Media appears to have taken my advice and sold off most of its tower sites, with Cumulus and other operators trying the same.

Guy who runs the just-sold company that owns HD Radio is about to cheerlead at #RadioShow2016. Nobody but radio execs cares about HD Radio.

With the Radio Show in Nashville now in full drunk, people are discussing the bright future of HD Radio, which is a joke filled column unto its own, podcasting and somewhere in a super secret closed off and guarded locked room discussions on allowing foreign ownership of American broadcast stations.  This is above and beyond the current foreign ownership limits. 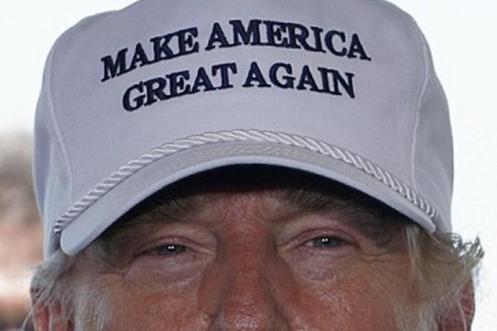 How has Donald Trump not picked up on this one?  Mexicans, Muslims and the Chinese owning American radio stations…where ever?  Get me one of those redneck “Make America Great Again” ball caps right now!

As Larry Wilson, the big cheese at Alpha Media, said at the Radio Show, “Watching iHeart Media is like watching the national debt.”  That’s $21 billion in debt and billions more than the entire radio industry’s annual revenue combined.

With some consolidator companies gagging on their debt and their stocks trading as “penny stocks” with no hope of ever paying their investors back, who do you think wants the Communist Chinese, for example, to invest in American radio?  The listeners or the consolidator companies?  And why would the Chinese want to own American broadcast stations?

Many companies represented at this year’s Radio Show have gotten all the money their going to get from American investors and banks.  It’s now time to reach out and get money from foreigner investors who want Americans to hear their propaganda.

FCC and NAB, let’s get to work!  Prove me wrong about nothing getting done at the annual Radio Show. Americans need to hear the virtues of communism via the radio stations of America and its bought and paid for radio personalities.  All it takes is for you to ignore the public’s interest and sell out the American listener one more time.

← Fake Callers on Talk Radio? Say it Ain’t So!
A Native New Yorker Apologizes to America →

7 comments for “The Annual “Radio Show” That Accomplishes Nothing”