The political advertising spend is not happening for conservative talk radio where I live in Hamilton County, Ohio.  Oh, you don’t know about Hamilton County in conservative southwestern Ohio?  You may know it as Cincinnati.  It’s the conservative Ohio county that voted President Barack Obama into office twice, swinging the entire state to him in 2008 and 2012.  And he was running against sane Republican opponents.  A lot of money was spent here in candidate and SuperPAC money back then.  Big money.

A while back I penned a piece about conservative talk radio’s plan on November 9th.  The audience is already shrinking, old, male and basically dying off.  And yet during budget time, conservative talk radio stations always plan for this huge windfall of political money.  Even 15 or 20 years ago I questioned a format business model focused on hoping for political money every four years.  Makes total sense, right?

I asked a few radio sales managers in this market how the political spend was this election.  The response from one and I quote, “Not happening.”  Of course I knew this already by listening.  I haven’t heard many political commercials, except for a some down ballot candidates.

So conservative talk radio hosts, “What are your plans for November 9th and beyond?”  Have you thought about this?  Why not?  Do you have an exit strategy?  You better.  You’re going to need one and quick.

November 9, 2016, the day after election day, is a very important date and it’s fast approaching.  In 2012, I predicted 2016 would start the end for conservative talk radio, a format that exists mainly on the AM broadcast band, a medium with no future.  I’m guessing somewhere after passing through that fancy mist tunnel in Manhattan they’re already thinking about putting this conservative talk radio dog to sleep.

The steps are already being taken.  Exhibit A – “Rush Limbaugh.”

In 2012, I had no idea Rush Limbaugh would be taking a massive pay cut just to stay on the air.  Weeks ago I heard his salary was cut to $15 million from $50 million a year.  That’s a 70% cut in pay, if true.  It may be more.  If you’re a conservative talk radio host, your next contract negotiations are not going to go well – if there’s any negotiation.  Do you believe you have an upper hand with declining revenues and ratings? Limbaugh, in conservative Cincinnati, was ranked #14, P25-54, in the September ’16 PPM.  Is “everybody” listening as the industry trade ads say?  Hardly. 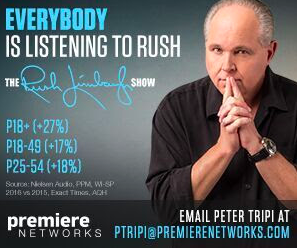 The 2016 election season is almost over with little political spend and that’s not good for the 2017 budgets of conservative talk radio stations.  This time consolidator companies won’t be waiting for things to turn around in 2020.

Then there’s the rhetoric.  America is changing and conservative talk hosts believe they can stop it.  They can’t.  It is no longer the world of aging, white Baby Boomers, which I’m one.  Our destiny is now in the hands of the Gen X’ers and Millennials.  American society reflects their believes and desires. Conservative talk radio should be reflecting and speaking with the younger generations to survive, but have mistakenly chosen to double-down with an aging demographic providing no future for the format, that if done correctly would be viable.  And conservative talk radio hosts, for no other reason than he’s running as a Republican and after vilifying him during the spring primaries, are defending the indefensible comments and behavior of Donald J. Trump.

Conservative talk radio hosts long ago forgot they’re in the entertainment business.  They’d rather push agendas to further “the cause,” what ever that may be.  Ironically though, Donald J. Trump is in the entertainment business and he never forgets it.  The just concluded debates were “must watch” TV, for no other reason than Trump’s unpredictable comments and entertainment value. Warts and all, he’s interesting and entertaining to watch. But, the next day, following each debate, conservative talk radio was (as expected) predictable and boring, offering nothing unique, insightful or entertaining. It certainly wasn’t “must listen.”

One other thing, Mr. Trump has an exit strategy.  After his scorched earth policy campaign harms what’s left of the Republican party (a draining of the Republican swamp needs to happen), conservative talk radio and its hosts will be collateral damage.  At a time when these hosts should have been embracing, entertaining and focusing on the larger audience universe, they chose to parrot Trump and by doing so, exclude women, who make up 51% of the population – large breasts or not, Hispanics, African Americans, Gold Star families, prisoners of war, the handicapped…the list goes on.

When it’s all said and done Trump still has his billions, his personal mega brand and may be a TV network, although he recently denied it while “Live from Trump Tower” began streaming on his Facebook page.  What will conservative talk radio have left?  A shrinking, aging male audience that’s unattractive to advertisers.

Xavier University in Cincinnati does research which tracks, on a monthly basis, the consumer sentiments of people nationally. 1000 people are surveyed each month in their American Dream Composite Index.  Two of the last three months the survey has asked where people get their political news.  The choices were TV, Radio, Print, Social Media.  Radio comes in dead last.

The irony is Millennials, in this survey, seem to be using radio more for political news than Boomers, not that the numbers are anything to brag about.

Self important conservative radio talk show hosts are delusional believing they are influential in shaping the thoughts, beliefs and future of America.  Let’s take an accounting (with credit going to my friend Randall Bloomquist for this):

Has conservative talk radio been influential?  It’s time for a long overdue intervention and draining of this swamp.

Demographics are changing and driving our future and conservative talk radio and its practitioners refuse to acknowledge it.

← A Native New Yorker Apologizes to America
SpaceX’s Falcon Heavy rocket launch was a commercial? Son of a… →