I was talking to a radio outsider recently and he asked me about one of those weekend, brokered shows that seemingly pay the bills for many AM news/talk stations these days. The show was broadcast at bad time, on a low rated station and he figured it was a waste of advertising dollars.

He asked, “Why would they waste their money and time on this show?”

I responded, “Really? You don’t know? Their ego loves being on the radio.”

For some, being in media provides them a form of identity they crave, but can’t seem to fulfill otherwise. And when someone comes up to them and says they heard them on the radio or saw them on television their egos explode in delight.

In my lifetime I can think of only three famous people or performers that were able to walk away on top.

The first is The Beatles. They were offered generational wealth to get back together. They never did. If John and George were still alive, how pathetic would it be for them to be playing Las Vegas? You know they would. The mystique of The Beatles is kept alive today by them never again recording or sharing a stage together.

The second is the first man on the moon Neil Armstrong. Here’s a guy who could have taken his “one small step” and transformed that into billions. But, he became a professor at the University of Cincinnati and dropped out of the media spotlight. A trip to the moon and back in 1969 was enough for his ego.

The last is Johnny Carson. Did you know Jay Leno hosted The Tonight Show for over 20 years? After all that time he was still “the guy” who replaced Johnny Carson. Granted it was a different time, but that’s how popular Carson was. When Johnny gave his “heartfelt” goodbye, he disappeared.

Few of us have the opportunity to leave on top, and for many of those that do, they return only to find they can’t go home again.

I’ve never met sports radio personality Mike Francesa. I do know that he, along with his then partner Chris Russo, changed the way sports talk radio was done in New York City and across the country. They both were and still are exceptional entertainers. Francesa is to be honored for all he has accomplished in his career.

With that said, here’s where the ego part comes in. Back in January 2016, Francesa announced he was leaving his WFAN radio show at the end of his contract, which expired almost two years later. Two years? Who does that? And why would you do that? An unchecked ego and a negotiating trick will make you do it. The strategy, then, was to get offers of love and money from WFAN radio’s competitors. The offers would probably come in by the dozens or so they thought. And as soon as an offer that he liked came along, Francesa would take that offer to his employer and say, “I want this and not the measly (reported) $3 million a year you pay me now.”

But, it seems nothing good came in during those two years. So his employer gave him a retirement party, a public send off, took his security card and sent him on his way. That was four months ago.

A funny thing happens in a place like New York City when you’re no longer a “celebrity.” The best table at your favorite Italian restaurant is no longer available and you need to call ahead for reservations like the commoners. You no longer get the “A-List” celebrity treatment you’re accustomed to. And worst of all people constantly come up to you and remind you that you used to be a “celebrity,” and someone that was important.

The New York Post is calls Francesa return a “crawl back.” 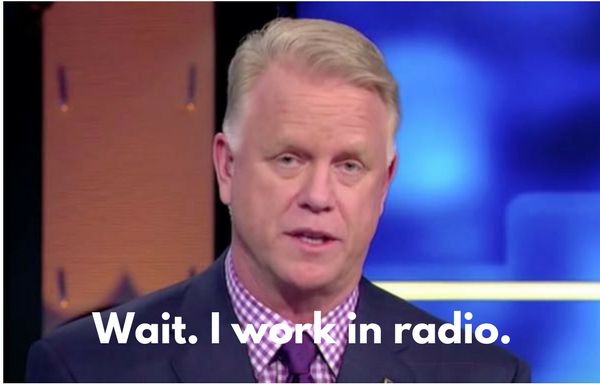 Former NFL quarterback and current WFAN morning host Boomer Esiason, outraged by his return revealed, “Radio can be a real sewer pit.” He’s right about that. It is a tough business. “They’ve gotten screwed by a guy who said he was never going to be on this radio station again.” He was defending Francesa’s replacements with that comment. I’m guessing Boomer and Mike won’t be exchanging Christmas cards.

Even worse, the local programming management of WFAN didn’t appear to want him back. In desperation, Francesa and his agents went right to the top to WFAN’s corporate ladder and apparently negotiated with the company’s CEO and President. He cut his deal with the Entercom C-Suite, which appears to have ignored the local station’s wishes. This will make for fun staff meetings.

Media can be a very cruel mistress to one’s ego and in this case one’s bank account.

Entercom, Mike Francesa and CAA Sports on Friday announced a partnership spanning broadcast radio, digital and live events. The partnership includes the debut of the “Mike’s On” radio show, featuring Mike Francesa, airing Monday through Friday from 3 p.m. until 6:30 p.m. on WFAN 101.9 FM/660 AM, beginning Tuesday. The partnership also includes the launch of a mobile app and online destination by the same name, “Mike’s On,” which will feature exclusive live video streaming of Francesa’s weekday radio program on WFAN.

“We are excited about this partnership with Mike and CAA Sports,” said Entercom President and CEO David Field. “We are proud of the terrific lineup on WFAN and are looking forward to bringing Mike back into the mix in this new, multiplatform and innovative way.”

“After exploring several options, this partnership with CAA Sports and Entercom was the perfect fit,” said Francesa. “This partnership allows me the chance to return to WFAN and all of our loyal listeners, as well as significant opportunities, including the app and live events, that are completely new. I look forward to working with both companies on making this a very successful venture.”

The “Mike’s On” app and website will be the exclusive home of the “Mike’s Football Sunday” show, beginning with the 2018-19 football season. It will also provide exclusive audio and video archival content of Francesa dating back through his storied 30-year career at WFAN, in addition to a live audio stream of Francesa’s WFAN show for sports fans in New York and throughout the country. The app will be free to download in summer 2018 and will offer a subscription option for fans who want to hear and view additional content. WFAN and “Mike’s On” will be hosting live events across formats and venues, including live broadcasts, one-on-one interviews and a speaker series. For more information, visit http://www.mikesonnetwork.com.

“From the very beginning of our relationship with Mike, we fielded a tremendous number of offers for him across an array of business areas,” said Michael Levine, co-head of CAA Sports. “As we got to know Mike, we believed that the best opportunity would capitalize on his entrepreneurial spirit, and build upon the appetite of his multi-generational fan base. Our partnership with Entercom enables Mike to interact with fans across multiple platforms, including digital and live events, bringing him closer to his audience than ever before.”

The audio stream for the “Mike’s On” radio program on WFAN will also be available on Radio.com.

← Surprising reasons Hannity did nothing wrong in defending Cohen
Would CSNY’s “Ohio” make it to the radio today? →

8 comments for “The real reason Mike Francesa is back on WFAN.”