Spending time in the privacy of the privy gives one time to really think. 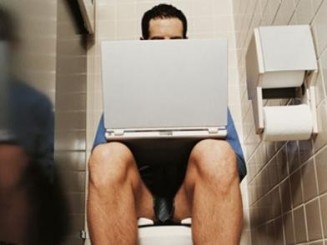 Taking the term “laptop” to the next level.

What would you say if a sports team, let’s says a football team, had to spot its opponent 29 points before each game?  I’m not talking about a betting line at a Las Vegas sports book.  I’m talking about the actual game!

The NFL, for example, thinking Tom Brady and Bill Belicheck are so good that it’s not fair.  So, before playing the Seattle Seahawks in the Super Bowl this year, the Seahawks started with 29 points on the scoreboard, playing the game normally, having the opportunity to score more and the Patriots having to play catch up to beat them.

That’s what’s happening to news/talk radio, being driven by corporate demands of more and more revenue as ratings decline.  Corporate radio refuses to make the needed programming adjustments to address changing demographics, changes in culture or even changes in politics. Just maintain status quo and keep throwing out “red meat” political talk to keep the remaining 65-plus, angry white male listeners happy and let the format fade into the sunset.

It doesn’t have to be this way.

There are 168 hours each week, 48 of those hours are on weekends.  Or put another way 28.6% of each week’s broadcast hours are on weekends, those 29 spotted points I mentioned above.  Most news/talk stations ignore Saturdays and Sundays, literally chasing people away with programming few want to hear and driven by the reality they can no longer sell the mostly syndicated, extreme right wing programming they broadcast weekdays.

How do they ignore Saturdays and Sundays?

I feel for local morning hosts, probably the only local personalities left at a news/talk station, trying to jump start their stations at 5am on Monday morning, hoping to attract people chased away over the weekend with their  political babble of how Obama is ruining us now that “everyone has Obamacare.”  I actually heard that this week from a local host who must be a closet Brian Williams’ fan.  That certainly comes as a surprise to me with United Healthcare insurance.  I didn’t know they changed the company name to “United Obamacare.”

So what are the real issues here?

“I can’t get no. Satisfaction.”

Are programmers that unskilled, untrained and stupid to believe a brokered program to cleanse one’s colon is going to gather an audience?  I hope not.  But, they’re not making the decision.  It’s the corporate programmers, most of whom have never programmed a news/talk station.  Go ahead.  Ask any of them if you can handle the truth.  You have to laugh when these brokered shows or the “suggestion” of sold brokered hours are forced down on the PD of a news/talk station, but rarely crammed down on any other format?  Why is that?  The audience of a Classic Hits station is close in age to a news/talk audience (at least it used to be)?  People listening to The Rolling Stones get constipated too!  Even The Rolling Stones gets constipated!

In defense of the account executives burdened to sell the news/talk format of today, the majority of these stations consist of a local weekday morning show and then 21 hours of syndicated programming mostly spewing the same political narratives hour after hour.  Fewer advertisers are wanting in on shows like Rush Limbaugh, Sean Hannity and Glenn Beck due to their aging, angry audiences and extreme opinions.  I actually heard Hannity say last week the “economy is in shambles.”  What?  How can you say that with a straight face “Mr. 1%?”  To pay the electric bill, stations are forced to sell blocks of paid programs on weekends.  Of course, many of these shows do provide a solution to help an angry 65-year old white male stay…how shall I say….”regular.”

Glad I went before I left.

News?  Weather?  Traffic?  In the opinion of many corporate programmers and local programmers, news, weather and traffic stops in a listener’s life at 6pm on Friday and resumes Monday morning at 5am.  I guess I imagined the 6-inches of heavy, wet snow in my driveway last Saturday morning.  Or the Sunday morning a few months ago when I was stuck in traffic in Jackson, Mississippi and wondered why I barely moved for 90 minutes.  News?  The audience can wait for that until Monday morning.  Immediacy, the core of what makes radio so great, is an imposition to most news/talk stations of today, even though news, weather and traffic are the gateway elements into the format – the metaphorical door people walk through to be exposed to the talk product. 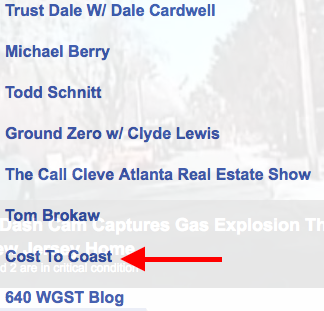 Guess they changed the name of George’s show.

Weekends are made to relax, anyway.  No need to pay attention to a radio station or even a station’s website.  I’m guessing the average news/talk PD doesn’t turn his station on weekends or even looks at his station’s website.  Production elements?  No need.  In diary markets, call letter mentions?  Why bother.  Angry and constipated Grandpa doesn’t need to relax anyway.  He needs to strain and bare down.

48 hours of dated and irrelevant programming.  28.6% of each week’s broadcast time is ignored.

I just heard WLS-AM in Chicago canceled a syndicated weekend show to air more brokered shows.  I guess their 1.1 share (6+) via its 50,000 watts isn’t yet low enough.  And there’s WNEW-FM in Washington, the “all news” station, rumored to be adding brokered shows.

“Sir. Just as Darryl Parks predicted, after your move to the AM station in Pittsburgh, fewer people are listening to you. Have you thought about discussing laxatives?”

Then I remembered there was this  iHeart Media talk station in Pittsburgh that sent Rush Limbaugh and his other 1% buddies into Siberia on WJAS-AM and turned country!  I’ll bet the next time I’m in Pittsburgh and can’t “go” I can still turn on WPGB-FM, now known as Big 104.7, and hear how to get some relief.  They had to keep those colon cleansing shows through the format switch from news/talk to country.

But alas, no.  Amazingly, the music they play during the week is the same music they play on the weekends.  They actually want their country listeners to listen 7 days a week, not 5…constipated or not.

What is one to do if they can’t have a bowel movement in Pittsburgh?  Drive to Erie?

“I owe my regularity to talk radio!”

Corporate radio has given up on news and talk.  But, Grandpa is lucky.  At least corporate radio recognizes the format’s unique niche to be “the” weekend laxative station, providing Pappaw the relief he needs.

I guess you can say news/talk radio broadcasts in Grandpa’s interest, convenience and necessity.

17 comments for “Talk Radio – Becoming the Weekend Laxative for Octogenarians”